New Pendant Options: Pendants have changed as well. Strictly speaking, track lighting is a form of pendant lighting, in the sense that the light fixtures are hung from the ceiling rather than placed directly upon it. However, the introduction of electrified tracks has provided the opportunity to have a large number of lighting sources that can be arrayed either in a line or on a curved track according to one’s needs.

Directed Lighting: Track lighting systems also became one of the main housings for directed lighting. While reflected light had always existed (think of lighthouses), the ability to easily use parabolic reflectors in halogen light bulbs gave the possibility of using home light sources that didn’t simply radiate light but actually sent that light in a single direction. This created the possibility of what is called “accent lighting”, that is, lighting that enables you to accent particular features, including artwork or architectural details.

Illuminated Ceilings: The placement of the fixtures is not the only element of contemporary ceiling lighting. It also features the use of directed lighting to light the ceiling itself, with the light directed upwards. This has a number of effects. First, it brings drama to the room and increases the sense of spaciousness by brightening up the ceiling (we psychologically tend to think of things that are brighter as further away). This is especially effective with cathedral ceilings. It also changes the overall lighting quality. Rather than be lit by the light source directly, the light is reflected from the ceiling, softening it and providing ambient, rather than direct, light.

Contemporary ceiling lighting fixtures have changed a great deal over the last century, to the point where they barely resemble their first incarnations. When electricity first became available, fixtures were often designed to mimic the look of the ones they were replacing. They were simply “electric lanterns”, so to speak. The materials used for these fixtures are often brass, wrought iron, blown glass, or stained glass, such as you see in tiffany-style lamps. Light bulb types for traditional style chandeliers can still be made to resemble candle flames. 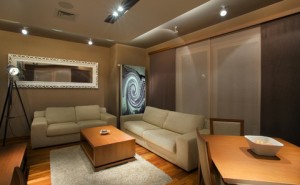 The introduction of parabolic reflectors allows for targetted spot lighting.

Functionalism: In contemporary ceiling lighting, this trend has completely changed. Fixtures are usually not designed to look like candles or lanterns, and there is a broad range of options. In fact, contemporary ceiling lighting has picked up many of the styles of modern design. For instance, track lighting is often designed to look very functional yet sleek, picking up the style of functionalism. Track and other fixtures are often made of glass and metal, with sleek and simple designs, with emphasis on the geometry of the fixture rather than on decoration.

Minimalism: Recessed lighting is itself an example of the modern trend of minimalism. After all, what could be more minimalistic that removing the fixtures from the field of view entirely? Recessed lighting is not the only way that fixtures are minimalized and even hidden. They can be hidden by placing fixtures behind or above exposed beams, or also by using cove lighting, which hides fixtures behind a bulkhead or cornice. This can create dramatic effects and help define the shape of a room by creating a sharp line of contrast between the light beams emanating from the fixtures and the unlit wall in front of them.

Radical Design: There are even some truly radical changes in fixture design. In recent years, illuminated ceilings spread general light through the room, using fluorescent or LED light fixtures behind a translucent surface. Other radical forms of design include such fixtures as fiber optic lighting, which can provide irregular lighting sources and even neon, in which lighting is used almost as a kind of indoor art installation.

How can I integrate contemporary ceiling lighting in my decor?

Integrating contemporary ceiling lighting into your existing decor successfully will depend on several factors, which are described below

Room Size: Dramatic lighting effects, incluing illuminating the ceiling with uplights, are especially effective in large rooms and with cathedral ceilings. However, cove lighting can be used in smaller rooms as well and is often seen in kitchens, with light fixtures placed on the tops of cabinets. Recessed cove lighting in entry hallways can add drama and formality to small spaces. If you want to use a decorative lighting fixture, then it is important to consider the size of the room. A too-large lighting fixture will overwhelm a small room, as well as create a “glare bomb” of light that is too bright for the space. Most rooms will require multiple fixtures, and choosing fixtures that co-ordinate with similar materials or design will help to unify the room.

Level of Formality: Most of the contemporary ceiling lighting fixtures that are available today are best suited to casual rooms such as family rooms and eat-in kitchens. There are many fixtures available that have a whimsical feel, such as pendants made with twisting metal or pod-like bulb housings. Lights with paper shades that take their inspiration from oriental lanterns work well in casual spaces.

If you are choosing track lighting, it can give your room an industrial feel, although more decorative options are becoming available in this area. Track lighting works well in urban loft-style condos that have been repurposed from old warehouses, as it fits in with the industrial style of the architecture. For formal rooms, minimalist styles made out of high quality materials will give a room a sleek, modern look. There are many attractive contemporary chandeliers available. 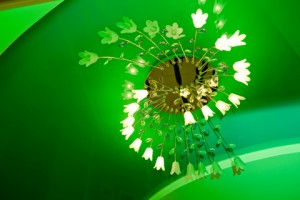 The chandelier has itself transformed, mixing classic lighting quality with modern style.

Style of decor: If your rooms are mainly traditional in style, than it is usually best to choose traditional style fixtures. Contemporary ceiling lighting fixtures naturally fit well with modern and minimalist decor. However, many home-owners and designers today work with eclectic style, purposely juxtaposing traditional with modern elements. The key to making eclectic style work is to find some element of the design that is unified throughout the room, for example, a particular colour, motif, theme, or material. In terms of choosing contemporary ceiling lighting fixtures, this could mean matching a metal fixture to another element in the room of the same material, or having the shade colour be repeated in other areas of the room.

Putting it all together:

There are many options to choose from when considering contemporary ceiling lighting:

In sum, then, there are a number of different options for those looking to integrate contemporary ceiling lighting.

This article was co-written exclusively for Home-Lighting-Design.com with Katherine Bader, M.A. Mrs. Bader studied art history and architecture before leaving the professional world to raise her children.

Back from Contemporary Ceiling Lighting to Home Lighting Tips