Modern pendant lighting comes in three different categories: chandeliers, pendant track lighting and single pendants. Each has some features of its own that shape their style and lighting quality. 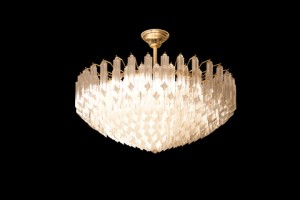 This chandelier shares many of the features of modern pendant lighting, including geometric shapes, transparent materials and sparkle.

While the word “chandelier” gets its root from the French word “chandelle”, meaning “candle”, and refers to (very) traditional ceiling fixtures in which many candles are hung on a single pendant, this is no longer the case. Today, “chandelier” refers to any single pendant that has two or more sources of light on it. In fact, one of the main trends in chandeliers today is to use a very large number of light sources, creating a great deal of “sparkle” or light that is decorative in its own right.

Pendant track lighting usually has a few pendants, between three and eight, which hang from the track in either a straight line or in a fixed curved pattern. This provides multiple sources of light that illuminate more than they sparkle. Because there are usually only a few of them, they are usually spaced more-or-less evenly and are similar in appearance.

Single pendants provide only a single source of light that is attached directly to the ceiling. However, unlike the single pendants of just a few decades ago, the trend in modern pendant lighting is to hang multiple pendants next to each other rather than just have a single, very bright pendant. Because of installation costs, the light sources are usually brighter than those found on chandeliers and similar in number to track pendants. However, not using tracks provides more flexibility in terms of where the pendants are located on the ceiling. 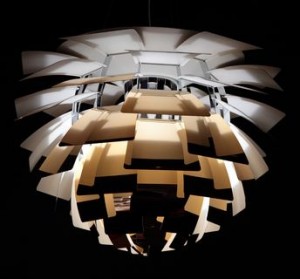 Modern pendant lighting often includes a number of geometric shapes in its styles. Globes, for instance, are one of the most common shapes used today, often with multiple globes hung in an attractive arrangement. Cylinders are also quite common, especially when multiple pendants are hung close together, so as not to appear crowded. While linear geometric shapes are less common, there are many pendants using rectangular and even triangular edges, providing a modern look.

In addition, many of the geometric curves are quite complex, including curves that are themselves curved, creating oval and undulating edges. The artistic movement behind many of these shapes is the movement of Modernism, epitomized by the sculpture of Constantin Brâncuşi. The shapes themselves simulate motion, curving in multiple directions at once in ways that can’t be properly described in traditional geometric categories.

New materials also influence the decreasing use of color in modern pendant lighting. Often, unlike in traditional ceiling lighting, modern lighting uses materials such as glass and metal. While glass need not be transparent, colored glass alters the color of the light so much that few light sources will use colored glass shades, and the color defaults to transparency. Frosted glass is also often used, and colorless frosted glass is especially attractive. Metal used is often fully specular, meaning that it reflects with no color of its own.

Because of these trends in modern pendant lighting, the quality of the light emitted by the fixtures is in many ways different from that shone by traditional light sources.

With the advent of LED lighting fixtures, it is much easier to have many small points of light on one’s pendants. Many modern chandeliers will include over a hundred points of light, preventing any single point of light from becoming primary. This has the effect that the oldest chandeliers had: while the chandelier provides illumination, it also provides what is called “sparkle”, light that is decorative in its own right. By augmenting this sparkle with reflective and refractive materials, modern chandeliers are objects where the light itself is an object of beauty.

Because of the increasing use of transparent glass in lamp shades, it is becoming increasingly common for the light bulbs themselves to be visible. This fits with some of the tradition of Functionalism, in which the working parts of an object become a part of its design. This trend has diminished somewhat in recent years, as increasingly-used fluorescent bulbs are by-and-large less attractive than incandescent bulbs, so people like to hide them.

Nonetheless, visible light sources are generally a bad idea in lighting. Looking into anything but a dim light source (such as the LED chandeliers mentioned above) is uncomfortable, and can actually damage our eyes over time. Strangely, one of the primary principles in lighting design, avoiding “glare”, is ignored by many modern pendants. Glare above us can make it uncomfortable to look upwards, unconsciously causing us to look downwards within the room.

As a result, I suggest avoiding transparent shades in which the light source is itself visible. In a small room (no more than ten feet across), our brows will block overhead light, but any visible light source more than five feet away in a trafficked area (or six feet away with a ten foot ceiling) will cause glare. Instead, there are many attractive modern pendants that use frosted glass or other shades that do not cause glare. 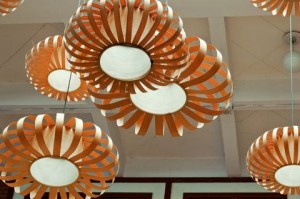 By using multiple pendants of different, like these lanterns, a “cascade” effect is created, causing a sense of dynamism.

Putting It All Together

Modern pendant lighting has undergone a number of changes in the last few decades:

With these ideas in mind, you should be in a better position to choose among the myriad options in modern pendant lighting.

Back from Modern Pendant Lighting to Ceiling Lighting Fixtures

Back from Modern Pendant Lighting to Home Lighting Tips